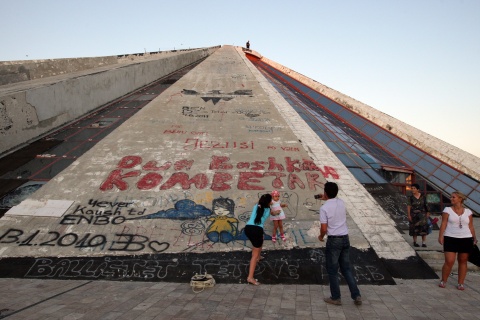 An Albanian takes pictures of his child at the so-called Pyramid, the International Cultural Center, in Tirana, Albania on July 21, 2011. Photo by BGNES

A petition against the demolition of the International Cultural Center signed by 6,100 citizens was sent to the Albanian President Bamir Topi by representatives of the “Civil Action for the Rescue of the Pyramid” movement.

“The Pyramid”, old mausoleum of the ex-Stalinist dictator Enver Hoxha, was built in 1988 to commemorate Hoxha’s 80th birthday, three years after her death.

The pyramid-shaped cultural center has become one of the most important historical monuments in the capital.

The government, however, has turned a deaf year to objections raised by famous Albanian architects and staunch supporters of the opposition building, according to a publication by Macedonian online news agency Kurir cited by its Bulgarian counterpart CROSS.

Albanian Prime Minister Sali Berisha stated that the new Parliament building should be ready by November 28, 2012, when Albania celebrates the centenary of its independence.

Five days ago, thousands of people gathered in front of the Pyramid to protest against Parliament’s decision to destroy the building.

Ardian Klosi, one of the initiators of the protest movement, said the people of Tirana oppose the destructive act, adding that they hope that the Albanian head of state will take the necessary measures, with the power conferred on it by the Constitution.