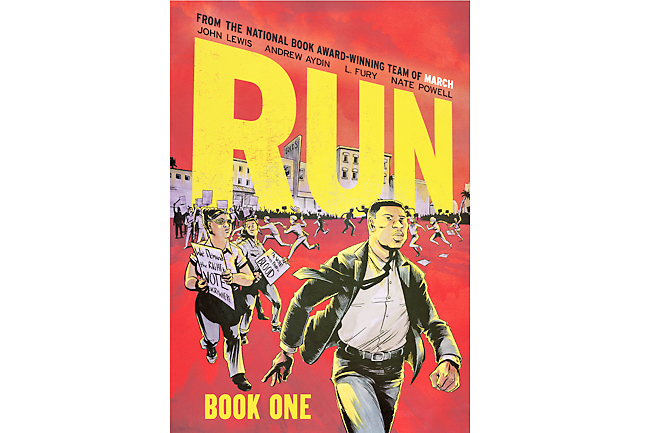 THE WASHINGTON POST – Representative John Lewis was so determined to complete his final memoirs at the start of the pandemic that he designed a security system. Andrew Aydin, his co-author and Capitol Hill neighbor, is reportedly delivering their final pages of work to the civil rights icon’s home, hiding them behind planters on the front porch. The Georgia congressman was 80 years old and receiving treatment for pancreatic cancer, so absolute social distancing was essential.

Hidden transfers early last year brought joy to Lewis in his final months. He died of cancer last summer, but not before telling his latest passionate story.

The creative result, Run: Book One, due out tomorrow, chronicles Lewis’s journey shortly after his crucial Blood Sunday March in Selma, Alabama – and immediately after the triumphant signing of the Voting Rights Act of 1965. which concluded Lewis’s previous graphic novel. project: his best-selling March trilogy. The pictorial sequel shines a light on how black activists became political leaders amid a national backdrop of racist violence, voter suppression and the Vietnam War – dramatic scenes and themes that seem of timeless relevance.

“He was very hopeful that leaving his legacy in a graphic novel would give a roadmap not only to this generation, but to generations to come,” Aydin said by phone from North Carolina.

Lewis loved to relate how, as a teenager, it was a comic strip – Martin Luther King and the Montgomery Story, which circulated widely in 1957 – that had drawn him into the nonviolent protest movement: in six years, he was the youngest speaker at the March on Washington. . The book’s brightly colored comic strips, featuring characters such as King and Rosa Parks, had the power to “make it clear” and “make it real”, Lewis would say – especially appealing to a youngster who doesn’t. couldn’t get a library card. in his hometown of Alabama because of the color of his skin.

Lewis and Aydin began publishing the epic graphic novel March eight years ago, working with artist Nate Powell. The series has received wide critical acclaim, including the inaugural National Book Award for a comic book, and has become a staple in schools. Lewis led a procession of children to San Diego International Comic-Con in 2015, donning the same type of trench coat and backpack he had worn 50 years earlier while leading 600 protesters across the bridge Edmund Pettus from Selma. March was eventually exhibited in the same library where he had been refused a card more than half a century ago. Lewis was able to dramatize conflicts vividly, whether on the page or on the national stage.

Powell, who returned the cover of the third book of 2016, returned to draw the opening sequence for his new sequel: a protest scene that serves as a direct narrative bridge from March.

The race begins in Americus, Georgia, in the summer of 1965, when Lewis leads a dozen local activists.

Soon they are arrested and taken to jail. “The ink was barely dry on the Voting Rights Act, but already forces were rallying to retaliate using our own tactics, and American cities were poised to explode,” Lewis and Aydin wrote under images of hate. far right.

Because Powell had engaged in other book projects when work on Run began in 2016, the team turned to Texas-based illustrator L Fury to create most of the art. It was his first graphic novel, as well as his first non-fiction work. And to pass the audition, she needed to convince Lewis that she could draw him when he was young.